Growth hormone excess is most often the result of a tumour on the pituitary gland. These tumours are formed when growth hormone cells multiply abnormally.  Most tumours are because of a mistake in the genetic instructions to the cells instructing them to stop multiplying. A benign tumour, or mass of cells in the pituitary, is formed over time.

How is Growth Hormone (GH) produced?

How is Growth Hormone (GH) Produced?

A number of events stimulate the production of growth hormone, including sleep, fasting and starvation along with low blood sugar, moderate to intense exercise, and various forms of stress (trauma, fever, and anaesthesia).

Growth hormone from the pituitary is released into the blood stream and circulates around the body, attaching to growth hormone receptors (GHR) on tissues throughout the body. This is much like a key and lock mechanism. The growth hormone is essentially a key searching out the lock it will fit.  The locks are on the outside of cells of most body organs, tissues, muscles, and bones. When the key fits the lock, it activates the mechanism to stimulate the cells to regenerate, repair and multiply. 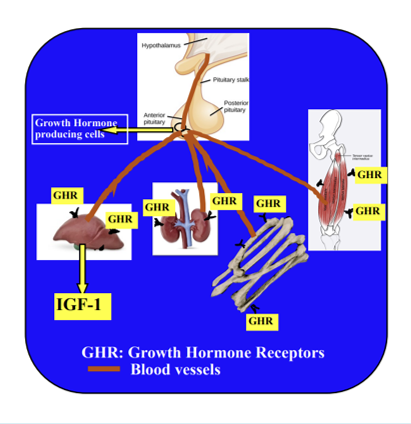 This happens in several ways:

1.When Growth hormone releasing hormone (GHRH) is produced from the hypothalamus, it provides a signal to its’ own cells to stop production, thereby limiting the amount of GH produced.

2.When GH attaches to tissue receptors, a chemical signal is sent back to both the pituitary to decrease GH production and to the hypothalamus to make somatostatin and to decrease or stop the production of GHRH and GH.

In acromegaly, too much growth hormone is produced based on the individual’s age and sex. When in the lifespan this occurs is important to the body’s response and signs and symptoms. During childhood, bones continue to lengthen and thicken under the influence of GH. Bones typically grow at the growth plate until late adolescence at which time the growth plates ‘fuse’ and stop further longitudinal growth. Giantism occurs under the influence of excess GH before the long bones fuse. Acromegaly is GH excess that occurs in adulthood after the growth plates fuse, and may result in thickening of body tissues but usually does not result in giantism.

What does Growth Hormone do?

What does Growth hormone do?

-Helps the body balance fluids (water and blood) and healthy body fats.
-Controls the level of sugar produced by the liver, and usage by cells.
-Helps the body use proteins and lipids.
-Increases energy levels.
-Enhances brain activity.
-Promotes a sense of wellbeing and quality of life.

How is Growth Hormone measured?

How is Growth Hormone (GH) Measured?

During the day GH is produced is in small amounts at irregular intervals or when stimulated by factors such as hunger, low blood sugar, food intake, intense exercise, trauma etc. At night, shortly after the onset of sleep, GH is produced in the highest amounts.  Once produced, GH is only available for measurement in the blood for between 11-19 minutes, making it difficult to determine the right time to draw blood to assess for high or low levels. Likewise, only the amount that is circulating in the blood is available to be measured, and not the amount that is already attached to cells.  Unless blood can be drawn at multiple intervals, GH levels may not accurately show the highest or lowest level or amount of GH produced during that 24- hours. However, GH attaches to cells in the liver, signalling these cells to produce the chemical Insulin Growth Factor 1 (IGF-1). IGF-1 has a longer life in the blood and can be measured at any time during the day.  Therefore, IGF-1 is used to help diagnose and monitor growth hormone levels during treatment.

A Blood test for IGF-1 can be drawn at any time during the day and compared to the normal values for age and sex. If this is above the normal range, a brain MRI with pituitary views is done to confirm the presence of a pituitary tumour, its size and location. If a tumour is found and is a macroadenoma (a tumour larger than 1cm), surgical removal is usually indicated. If the tumour is small (less than 1cm) further testing may be indicated.

More specific testing may be done to suppress GH production using an oral glucose tolerance test. In this test, an intravenous catheter is usually inserted into the patient’s arm and baseline GH and glucose levels are drawn. The patient is then given 75gm of a glucose preparation to drink with subsequent blood draws at 30-minute intervals for 3 hours. If growth hormone does not supress below 1.0ug/L acromegaly is diagnosed.

If a tumour is removed surgically, pathology is used to confirm the presence of growth hormone tumour cells. 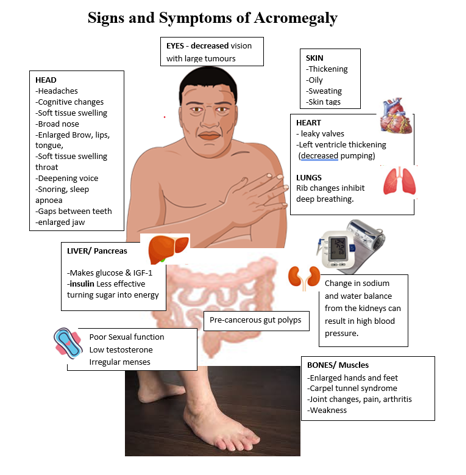 Headaches.
Changes in size of hands with rings no longer fitting, shoe size increasing.
Joint pain, stiffness, and progressive weakness.
Carpel tunnel syndrome symptoms with pain in writs and hands at night.
Snoring as tissue in the back of the mouth and nose becomes thicker.
Sleep apnoea may develop.
Voice quality may change with voice becoming deeper.
Loss of interest in sex and difficulties with difficulty with erections for men.
Menstrual cycles become irregular in women or absent.
Women may have difficulty getting pregnant.
Sweating a lot with little activity.
Skin becomes oilier and skin tags may grow.

Facial changes with more skin over the nose making it wider.
Shape of face changes, more rounded.
Tongue thickening causing more snoring and some difficulty with speech.
The skin of the lips becomes thicker, and lips become larger.
Jaw may enlarge, causing the lower teeth to become more widely spaced.
Skin above the eyebrows becomes thick and the bone of the forehead get thicker.
As the tumour gets bigger, side (peripheral) vision is slowly lost on one or both sides.
Memory and concentration may be affected, thinking and new learning may be more difficult.
Polyps grow in the colon that may be pre-cancerous and need to be removed.
Heart valves become thick and have more difficulty closing causing the heart to work harder: this, along with thickening of the muscle of the chambers of the heart means higher blood pressure and more risk of heart attack and stroke.
The kidneys are less effective in managing sodium and water balance and more water is the blood vessels results in higher blood pressure.
Changes occur to the rib cage and muscles become weaker making breathing more difficult.
The liver makes more insulin growth factor -1 (IGF-1) and glucose (sugar) and insulin is less effective moving sugar in the cells to produce energy. Diabetes Mellitus or high blood sugar levels may result.
The bones of the spine may become brittle and crack.

Other Testing and Evaluations

Other Testing and Evaluations

First line treatment is the removal of a pituitary tumour. This procedure is performed by a neurosurgeon. The best outcomes are achieved by neurosurgeons with experience in removing pituitary tumours. These surgeons are often affiliated with Pituitary Centres of Excellence.

Medical therapy can be used if the surgeon is unable to remove all, or enough of the pituitary tumour to decrease the growth hormone (GH) production and bring the IGF-1 into normal range. In some circumstances, the patient may be unable or unwilling to undergo surgery making medical therapy a first option.

Although clinical research continues to investigate and develop new therapies, currently 3 classes of therapy are used. These therapies target specific locations in the pathway from growth hormone production to its action on body cells.

The first drugs in this class were called first generation somatostatin analogues or ligands (SRLs) and included Octreotide and Lanreotide. Pasireotide was developed later as a second generation SRL. Long acting (LAR) formulations are administered every 30 days by injection and allow for extending the interval between doses in well controlled patients. However, only about 30-40% of patients are controlled on any one drug.

Oral Octreotide is approved for use in some countries as a twice daily capsule.  This drug requires fasting prior to and after administration to allow absorption

If surgery and/or medical therapy fail to control GH excess, radiation therapy may be recommended.

Several types of radiation therapy are used according to characteristics of the tumour. This treatment is usually managed by a radiation oncologist: 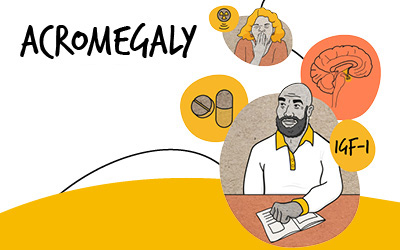 Want to know more about Acromegaly?